A journey through Palestine

Fourth edition of this description of a journey through Palestine by the French painter and writer Bazelaire (1857-1926), first published in 1889. In April 1888 she boarded a ship with a group of pilgrims, which, after a stop in Civitavecchia, from where she visited Rome, dropped anchor in Haifa. Accompanied by her brother Maurice (1840-1909) and her sister Isabelle (1847-89) she departed on horseback to tour the country for a month. Her emotional account describes the places they visited, including Mount Carmel, Nazareth, Tibériade, Jerusalem ("Am I really in Jerusalem, or is it but a dream about to fade away?", p. 129), Mount Olivet, Jericho, the Dead Sea, Bethlehem, Hebron, and the Valley of Josaphat. Among other adventures, a night spent locked in the Church of the Holy Sepulchre near Jesus's empty tomb inspired a particular sense of awe: "It is a night as long as a century, and as short as all joys in the world! [...] All those who have seen Jerusalem know and understand these things, I invoke all pilgrims!" (pp. 253f.).

The initials and illustrations accompanying the text were created by Bazelaire herself. The plans show the old and new towns of Jerusalem.

Extremities insignificantly rubbed; small flaw to spine. Paper somewhat browned and brownstained throughout. A pressed palm leaf is inserted between pp. 124 and 125. 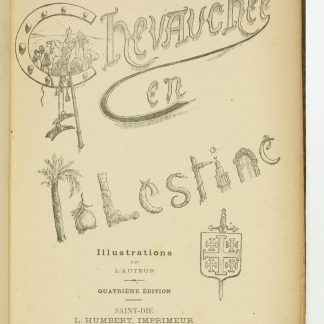