Reusner, a German poet, historian and jurist, assembled his original epigraphic portraits and augmented them with remarks collected from others such as Luther, Melancthon, and Fabricus. Reusner's fame, and thus his access to the luminaries of his day, resulted from his series of verses for the members of the Diet of Augsburg. The very fine woodcuts are the work of Tobias Stimmer and were probably cut into wood by Jobin. Many of the portraits were adapted from pictures collected by Giovio.

Occasional stains and browning, more pronounced in last gathering, and a few minor edge flaws. A wormhole near the bottom edge of most of the first half of the volume (not affecting portraits). A few contemporary annotations in the text. A prettily bound, good copy of a book rarely found complete, from the library of Pierre Bergé (1930-2017). 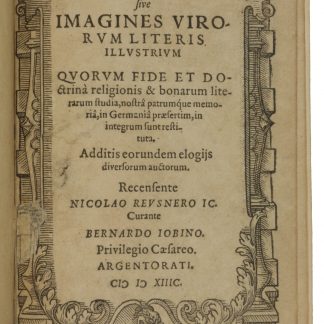