"The Germans and Swiss are starting to become uncourtly": The Duchy of Milan in the early 17th century

Collection of documents from Pedro de Toledo Osorio's four-year term as Spanish governor of the Duchy of Milan (1614-18), comprising two letters that are probably written in Toledo Osorio's hand and three official copies of royal decrees concerning the Duchy.

The oldest piece of the collection is a letter concerning a land deal. The governor assures the recipient that the matter is settled in Spain, probably referring to a royal permit, and that he will "gladly listen" to any objections. If there are no valid objections, the sale will proceed and, if necessary, by threat of force "because the Germans and Swiss are starting to become uncourtly" (Felizzano, 15 March 1617).

Shortly thereafter, Pedro de Toledo Osorio issued a royal decree, granting financial aid to the Carmelites of the city of Novara. The convent and the church had been reduced for fortification works during the Italian War of 1551-59 and the friars subsequently sold their possessions in order to buy new property. As a result, they lived in poverty and could not afford to build a proper new church. The first part of the document is a copy of a decree from 1 April 1608 that was either lost or ignored by the former governor, Pedro Henriquez de Acevedo, Conde de Fuentes (1600-10). The friars had pleaded before King Philip III to renew the decree and issue a new copy of the original, which was granted in Madrid on 16 October 1616. The government of the Duchy of Milan issued its official copy in Felizzano on 23 March 1617.

A royal decree in Spanish and Italian from 23 October 1617, stipulating compensations for loyal aristocrats who had sustained property damages during the Spanish-Savoian War (1615-17), just ended by the Treaty of Pavia signed on 6 October 1617. The compensations were to be paid for by war loot and sequestered goods. Among the six recipients were the Prince of Masserano, the Marquis of Garessio, and the Lord of Refrancore.

The latest document in the present collection is a royal decree in Spanish and Italian concerning a financial plea of the city of Como. Referring to similar financial aids to Milan and Cremona, the council of Como had requested the partial refund of a donation that it had given to the Spanish King on the occasion of the birth of Prince Philip, the later King Philip IV, in 1605. Philip III decided that a similar treatment of Como would be just and gave respective orders on 27 May 1618 in Aranjuez. The official copy was issued in Milan on 16 July 1618.

Pedro de Toledo Osorio was born in Naples, where he served as Captain General of the Galleys before moving to his ancestral duchy Villafranca del Bierzo in Léon in 1600. After his term as governor of Milan, he served as General of the Cavalry in Spain and was a member of the royal military council. Toledo Osorio rose to the Spanish Grandeeship in 1623 and took part in the successful defense of Cádiz from English troops in 1625. At the time of his death, Toledo Osorio was designated viceroy of Naples.

All royal decrees are counter-signed severally, annotated, and with parallel cuts. Two of the royal decrees show traces of papered seals, one of which well preserved, autograph addresses, and traces of folds. The decree from July 1618 somewhat creased and stained. Some documents with minor tears, browning to the edges and minor damage due to ink corrosion. 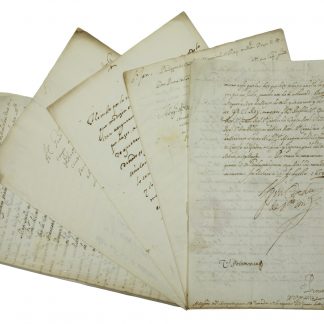