Two documents from Padilla's short term in 1595 as acting Spanish Governor of Milan, substiting for Juan Fernández de Velasco, 5th Duke of Frías. The signed document concerns a new duty on salt shipments to Milan on the river Po imposed by the Duke of Mantua, Vincenzo I Gonzaga. Padilla approves the suggestion of the Milanese magistrate to send a legate to the Duke so as to "represent the damage to his Majesty" and negotiate the tax.

The printed decree announces an extensive privilege for the production, storage, acquisition, and sale of saltpeter in the Duchy granted to Ruggero Robecco and his representatives.

Pedro de Padilla was a general of John of Austria from 1569 to 1571, serving in the decisive Battle of Lepanto. From 1585 to 1589, Padilla served as Governor of Oran and Mazalquivir in Algeria. Following his brief assignment as acting Governor of Milan, Padilla returned to Granada, where he died in 1599.

Handwritten document co-signed by three Spanish officials and with parallel cuts typical for Spanish-Milanese documents. With browning to the margins and minor tears, several small holes partly affecting the text.

The printed decree shows traces of folds and two insignificant tears to the folds. The year 1595 and the word 'saltpeter' are noted in brown ink on the verso of the document. 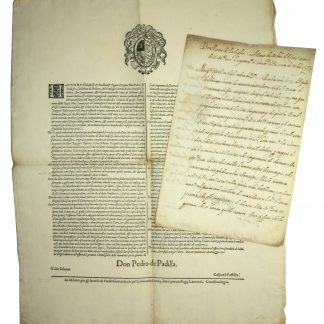