Willyams, Cooper. [A Voyage up the Mediterranean in His Majesty's Ship the Swiftsure. With a description of the Battle of the Nile on the first of August 1798].

Collection of 18 of the 43 illustrations from the account of the voyage of HMS Swiftsure and the Battle of the Nile by the British clergyman and artist Willyams (1762-1816), who served as chaplain aboard the ship, a vessel of Admiral Nelson's squadron captained by Benjamin Hallowell Carew. The 17 plates in the present volume show views of the caves of Gibraltar and the Spanish Church in the city, the Bay of Fournelles, Ischia, a street in Caiffe at the foot of Mount Carmel featuring two dromedars, Aboukir castle, caverns near Syracuse and the Temple of Minerva, the Palermo Capuchin catacombs, and a view of Scylla on the coast of Calabria, as well as an attack on the French camp near Aboukir, an attack of Turkish gun boats on the castle of Aboukir, and a group of three Arabs aboard the Swiftsure. The aquatint map shows the Mediterranean Sea with the courses of the British and French fleets up to their encounter in the Bay of Aboukir in August 1798. Designed by Willyams, the illustrations were engraved by Joseph Constantine Stadler. 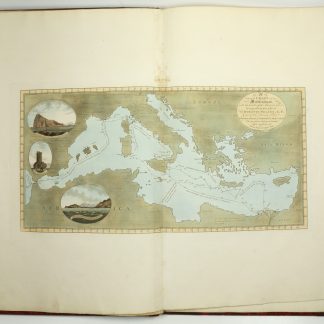