The Magic Flute and other dances for the First Republic

A collection of 27 and 26 short contredances mostly in 6/8 time for violin, partly with fingering, and two additional songs on the final pages, one of which is attributed to the Belgian composer Joseph Henri Mees (1777-1855). The song "L'Amour et les Grâces" was published in Rouen in the early 19th century as a "Romance" with guitar accompaniment (BNF, VM 28-1221). It might point back to an older version of the same song by the Italian composer Iacopo Gotifredo Ferrari, published among "Six nouvelles romances avec accompagnement de forte-piano" in Paris between 1785 and 1793. The lyrics by Abbé Garon are noted separately with three stanzas underneath the music and the final two stanzas inserted between the 18th and 19th contredanse of the second collection. It remains unclear whether the two collections of contredanses can be attributed to Mees. The 10th contredanse of the second collection in 2/4 time, entitled "La flute enchantée", is based on Tamino's aria "Der Vogelfänger bin ich ja" from Mozart's The Magic Flute, which had premiered in 1791. The first Paris production of an adapted version of the opera took place in 1801 (year X of the French revolutionary calendar).

Two hands can be distinguished, the second on the last 4 leaves on partly different paper, which might point to repairs. The original handwritten title was torn off the wrapper. 3 staves partly or fully pasted for corrections. With waterstains on the cover, browning and minor tears. Some ink corrosion; binding loose. 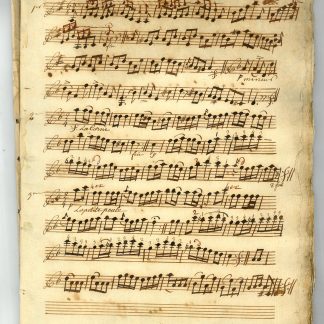