To W. W. H. Corbett of Birmingham: "Dear Sir, There is almost no patronage in my office, & there are more names down than can be admitted in 10 years. I believe other depart's are the same. The road is terribly crowded & full of disappointment. I advise you to stay in Birmingham - you will more easily get 10 good places there than one in a Gvt. depart't. To put your name down for a nomination would be of no use. You would be at the bottom of a long list, & should probably never be reached till you were beyond the age at which you could be admitted. I am sorry to give you no hope that I can help you [...]".

The Liberal statesman Bright, hailed as one of the greatest orators of his generation, served as MP for Birmingham from 1858 to 1889. In 1868 he had entered Gladstone's cabinet as President of the Board of Trade.

From the collection of John Henderson (1862-1938), the long-serving secretary of the National Liberal Club. 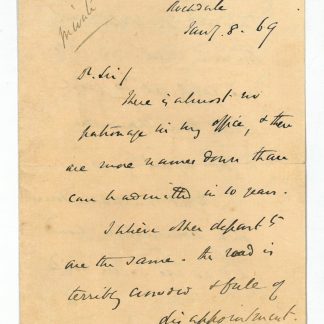