Collection of letters written by the forerunner of liberal and social Catholicism.

Among the addressees are the writer and founder of the "Magasin pittoresque" Edouard Charton (1807-90) and the politician Denis Benoist d'Azy (1796-1880). Lamennais recommends a young man to Edouard Charton: "La lettre incluse, mon cher Charton, est d'un jeune homme [...] qui a grand besoin d'être aidé [...]" (undated). In a letter to Denys Benoist he recommends a young officer called Muirson: "Cette lettre, mon cher ami, te sera remise par M. Muirson, l'officier anglois don't je t'ai parlé" (undated). In a letter to Mme. Maillefer he apologizes for being unable to accept an invitation; in a letter to M. Stubes he thanks for his sending him a copy of the "discours de M. Buckingham sur quelques réformes sociales". Other letters are written to colleagues and cardinals.

Lamennais was ordained a priest in 1817, the same year he published "Essai sur l'indifférence en matière de religion". In 1830, he founded "L'Ami de l'ordre" with Montalembert and Lacordaire. His social ideas embraced an enlarged suffrage, separation of church and state, universal freedom of conscience, instruction, assembly, and the press. His radicalism distanced him from a number of his friends. In 1833, he broke with the Church and published "Paroles d'un croyant" in the following year, which Pope Gregory XVI condemned for its philosophical theories.

Some of the letters brownstained. 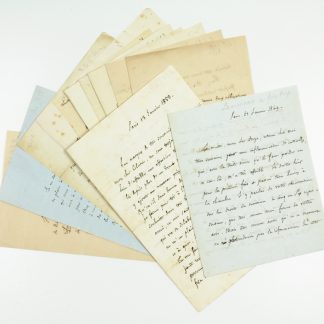