A letter addressed to Michael Faraday, FRS, by the seventh Astronomer Royal, G. B Airy, from the Royal Observatory in Greenwich, on behalf of his First Assistant Robert Main, who is "extremely desirous of hearing the lecture of tomorrow evening". Airy thus asks Faraday, "Would it be convenient to you to send me a card of admission for him?".

Robert Main (1808-78), elder brother of the mathematician Thomas John Main, graduated in 1834 as sixth wrangler from Queens' College, Cambridge, and served for twenty-five years (1835-60) as First Assistant at the Royal Greenwich Observatory, publishing numerous articles, particularly on stellar and planetary motion, stellar parallax, and the dimensions and shapes of the planets. From 1841 to 1861 he was successively an honorary secretary, a vice-president, and President of the Royal Astronomical Society. In 1860 he became director of Radcliffe Observatory at Oxford University and was elected as a Fellow of the Royal Society. An ordained priest of the Church of England, he preached regularly while living in Greenwich.

One light yellow stain and faint browning to the edges. The final page has pencil markings, some finger-staining and one tear to the upper left-hand corner. A poignant piece of evidence for the eagnerness among scientists in the first half of the eighteenth century to gain access to Faraday's innovative work on electromagnetism and electrochemistry. 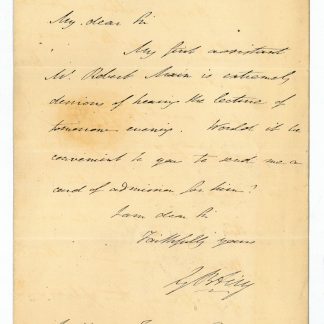