Robertson, David. A Tour Through the Isle of Man: To Which is Subjoined a Review of the Manks History.

Large 8vo (170 x 265 mm). (12), 235, (1) pp. With 8 aquatint plates by George Isham Parkyns. Bound for Duke Albert of Saxe-Teschen (1728-1822) by Georg Friedrich Krauss in half calf, the boards covered in white paper, the spine in six panels with red goatskin label in the second, lettered in gilt, the remaining panels with sunburst surrounding the Duke's 'AS' monogram, blue silk ribbon marker and marbled endpapers, signed.

The reissue in 235 pp., following the suppression of comments on the Duke of Atholl which appeared in the first edition (which was in 233 pp.).

The elegant binding is signed on the second flyleaf by the Viennese artist bookbinder G. F. Krauss (active 1791-1824) with his stamp: "G. F. Krauss, Relieur à Vienne". Krauss must count as the most prominent German bookbinder of his day, and the Duke of Saxe-Teschen was perhaps his most important client. The identity of the Duke's bookbinder was long a mystery, until Martin Breslauer's catalogue 110 offered a Krauss binding for Duke Albert, signed with the same stamp as ours, obviously performed in his style and with the Duke's monogram. Maria Theresa's son-in-law and sometime governor of Hungary (and then of Belgium), Duke Albert was a collector of the first order. His collection of graphic art forms the nucleus of Vienna's Albertina; "as a bibliophile he evinced a special taste for good typography [...] Oddly, scholarship was long at a loss to identify Albert's bookbinders. Only recently [with the discovery of Breslauer's signed binding] could it be proved that Krauss bound at least parts of Duke Albert's library" (Schäfer). 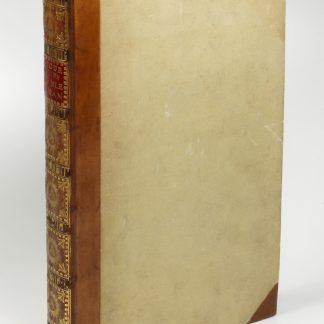