Concanen, Matthew. A Match at Foot-Ball; or the Irish Champions. A Mock-Heroick Poem, in Three Canto’s.

First London edition of a very early account of "foot-ball", a precursor to modern day Association Football, Rugby, and Gaelic Football, which were not separately codified until the mid-19th century. "Concanen's opening lines 'I sing the pleasures of the rural throng / and mimick wars as yet unknown to song" indicate that in writing a long poem about a football match, he was breaking new ground [...] The ball, we are told, was constructed of 'three folds of bullock's hide with leathern thongs bound fast on either side' and stuffed with hay. There were goals at either end of the pitch constructed by sticking two willow rods in the ground some feet apart, bending them towards each other and tying the ends together so that a semicircle was formed". The first edition appeared at Dublin in 1720. An early work by the Irish poet and lawyer Concanen (1701-49), who was appointed attorney-general of Jamaica in 1732, a post he held for over sixteen years. 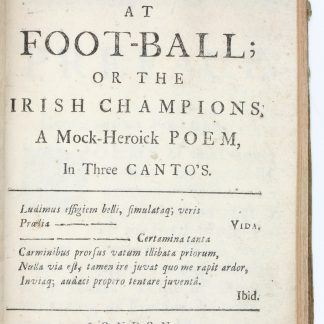