After various engagements in Paris, Nathalie had her successful debut at the Comédie-Française in 1848 and was chosen to become a Sociétaire in 1852. Today, Mademoiselle Nathalie is best known for a violent altercation with the young Sarah Bernhardt on 15 January 1863. Bernhardt had just debuted at the Comédie a few months earlier when her younger sister Regina accompanied her to a ceremony on the occasion of Molière's birthday. During the event, Regina accidentally stepped on the train of Mademoiselle Nathalie's gown, who forcefully pushed the young woman away. In the ensuing altercation, Sarah slapped the Sociétaire and caused her to fall. As Mademoiselle Nathalie would not apologise to Regina, Sarah Bernhardt refused to apologise in turn, which led to her being dismissed from the Comédie-Française. Although Bernhardt's debut at the Comédie had been far from successful, her dismissal nearly marked the death sentence for her career. The premiere of Victor Hugo's "Ruy Blas" on 16 January 1872 marked Sarah Bernhardt's triumphal return to the Comédie-Française. 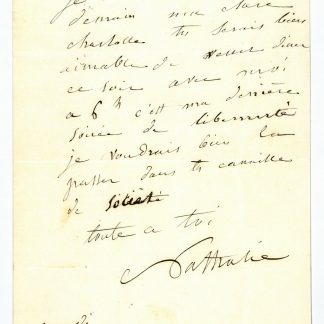