First edition, containing "the earliest of Bacon's authentic works to be printed" (DSB). Often referred to as one of Bacon's most important writings, it occupies leaves 37 to 52 of the volume. "A very rare book which [...] contains the editio princeps of Roger Bacon's 'De mirabili potestate artis et naturae' which is identical with his 'Epistola de secretis [...]'. This book, which has often been reprinted and translated, is, according to Hoefer, one of the most remarkable and at the same time one of the most authentic works by Roger Bacon. It contains almost prophetic gleams of the future course of science, dealing with automobiles, flying machines, diving-bells, telescopes, burning-mirrors, a sort of gun-powder, etc. As all the books edited by Oronce Finé it is beautifully printed and adorned with fine criblé initials" (Duveen). Bacon's enumeration of these "wonderful machines for flying, lifting weights, and driving carriages, ships, and submarines. and so on, which he believed had been made in antiquity and could be made again" (DSB I, 380), appears on leaf 42, while the oft-quoted allusion to the composition of power of gun-powder is on leaf 52r. Indeed, the ascription of the invention of gun-powder to Bacon is very doubtful, to say the least (cf. Sarton II, p. 958).

Edited by Oronce Finé, who prefixed Bacon's treatise with another by Claudius Coelestinus (ca. 1400), discussing miracles, secrets, the influence of planets and comets etc. Coelestinus may have been, like Bacon, a Franciscan friar: he is referred to by Finé in his preface as "Frater", and is so described in the heading to the work.

Light brownstaining throughout; several near-contemporary annotations and underlinings. Extremely rare: only three copies in postwar auction records (one offered by Lathrop Harper in 1976 for $3,500; two more sold at Sotheby's in 1989 and 2004, each commanding in excess of £5,000). 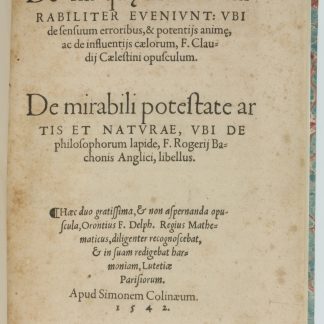