Provenance: "Ochterlony" bookplate to front pastedown of volume II, most likely that of David Ochterlony (1758-1825), commander of the British East India Company and British Resident at the Mughal Court in Delhi. Later obtained by the Schlagintweit brothers, eminent German 19th century scientists and explorers (their library blindstamps "Ex Bibliotheca Schlagintweit" to title-pages). Last in the collection of Prince Konrad of Bavaria (1883-1963), a member of the Bavarian Royal House of Wittelsbach (his bookplate to pastedowns of two volumes and front free endpaper of the other, his library stamp to half-titles).

Bindings professionally restored; vols. I and II lacking title-labels. Tears in gutter of one folding plate repaired with old adhesive tape (not touching image). Some minor spotting, offsetting of plates and text; light marginal dampstaining to a portion of volume two. A scarce work with fine provenance. 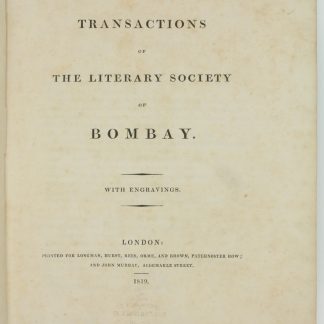