Shipping crude oil around the world: a trove of more than 1,000 photographs

Intriguing material documenting the career of a Royal Navy officer serving aboard the oil tanker "Stanvac Manila", operated by the Socony Vacuum Oil Company, in the mid-20th century. Unusual in its extent, the collection reflects almost every step of his career, spanning more than 60 engagements on 20 different vessels from 1928 onwards. It includes Owen's continuous certificate of discharge up to 1957, giving the name of each ship he served on, the date and place of his engagement and discharge, his rating, a brief description of the voyage, and a report of his character, signed by a superior. Among the more remarkable entries are his engagement as third mate during "special operations for the liberation of Europe" in 1944, his service aboard the "Stanvac Manila", which he boarded for the fifth time in Bahrain in 1951, and his five years aboard the "Hua Heng", which he boarded and disembarked from several times in Singapore.

Further, the archive comprises identity cards featuring Owen's picture and fingerprints, as well as certificates of his advancement from lifeboatman (1937) to master of vessels of more than 1,600 gross register tonnage (1981). A certificate of proficiency in radiotelephony and a medical certificate deeming him "physically unfit for naval service" in 1940 are also included.

The collection is topped off by several photo albums mainly illustrating the voyage of the "Stanvac Manila", providing views of the places visited along the way, including Bombay, Sydney, Brisbane, Manila, San Francisco, Hong Kong, Istanbul, Madeira, New Zealand, Abadan, and the Panama Canal, depicting local ports and scenery, landmarks, coal workers, farmers, cattle and dolphins, as well as other vessels, including the SS Langleeridge in Portland, Maine, sailboats in Auckland, the "Stanvac Manila" crew, and impressive weather phenomena.

Signs of use; several photographs loose. A rare survival reflecting the eventful career of a British naval officer. 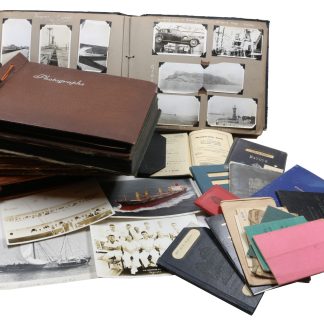