Jean-Henri Ravina was born into a family of musicians and had his first public appearance at the age of 8. He studied at the musical school of Charles-Valentin Alkan's father and later entered the piano class of Pierre-Joseph-Guillaume Zimmermann at the Paris Conservatory. At 17 years of age he became assistant to a professor at the Conservatory. Ravina resigned two years later in order to pursue his career as a virtuoso pianist. His tours of France, Spain, and Russia were highly acclaimed, and his compositions proved immensely popular.

Trimmed along the lower margin, slightly affecting the signature. With traces of folds, minor tears, some foxing and browning. Traces of former mounting and collector's notes on verso. 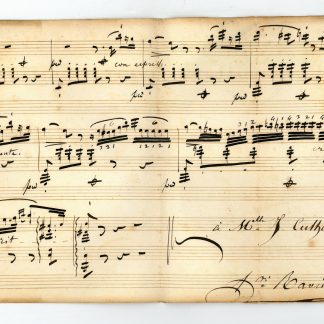