The original text of the primary logbook of the first Dutch expedition to the Arabian Gulf by Cornelis Cornelisz Roobacker: the first and only publication

8vo. 289-405 [= 117] pp. One folding table and 3 folding maps (1 belonging to another article in the journal). Brown paper wrappers, with title information of the journal on the front and spine, and the contents on the back wrapper.

This issue of the journal of the Royal Dutch Geographical Society contains the first and only publication of the original text of the primary logbook documenting the first Dutch expedition to the Arabian Gulf in 1645. This logbook was kept by the leader of the expedition, Captain Cornelis Cornelisz Roobacker, and it is one of three logbooks to have survived the journey. They are kept at the National Archives of the Netherlands as part of the collection of the VOC official Wollebrand Geleynssen de Jongh (1594-1647).

Roobacker's logbook was the only one of the three to have been selected for publication; it was edited by Albert Paulus Hermanus Hotz (1855-1930), a Dutch businessman in Iran and consul in Beirut. Hotz also wrote other articles on Dutch activities in the Gulf region and formed a large collection of Arabic manuscripts, early photographs and books on the Middle East.

"In the year 1645, two small Dutch ships, the Delfshaven and the Schelvis, set out from Bandar Abbas [on the coast of Iran] on their first trading mission to Basra [Iraq]. Only small ships could be used to reach Basra. [...] As was the custom for shipping to Basra, the Dutch ships took a local pilot on board on Kharg island. The pilot took the ships directly to the Shatt al Arab, but there trouble began. The Shatt al Arab was very shallow at that time [...]" (Slot, Kuwait). In his logbook, Roobacker gives a detailed description of the expedition, including the various problems and navigational errors they faced due to the size of the two Dutch ships and - according to Roobacker - the inaccuracy of the English nautical charts that were used on board the ships. He ended up drawing his own charts of the region, which survived among the papers of VOC official Artus Gijsels (1577-1647) and are now kept at the Badische Landesbibliothek in Karlsruhe. The illustration of a chart Hotz added to his publication of Roobacker is one of a different Dutch nautical chart that was made during the second half of the 17th century, since Hotz did not know about the original in Karlsruhe. Regardless of what chart Hotz used, it is a useful addition to illustrate the locations in the Arabian Gulf region, mentioned in the text of Roobacker's logbook of the expedition.

Very slight foxing throughout, 2 of the 3 maps at the end of the work are loose, overall in very good condition. 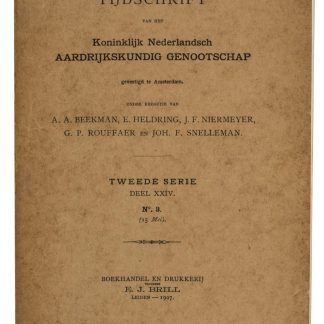