Wavell, Arthur John Byng. A Modern Pilgrim in Mecca and a Siege in Sanaa.

8vo. IX, (1 blank), 349, (1) pp. With a photo of the author as a frontispiece, 6 plates and 1 folding map of the Arabian Peninsula. Blue cloth with gold lettering on front cover and spine, and blind-tooling on front cover.

An account of the travels of an Englishman through Arabia, including an eye-witness account of the 1911 siege of Sana'a, the capital of Yemen. This siege was one of the last big events in the Yemeni-Ottoman conflicts, which started with the first Ottoman attempt to conquer Yemen in 1538. In 1911 a treaty was signed, with which Yemen became a vassal state of the Ottoman Empire until the country could take advantage of the Empire's collapse during and after WWI to reclaim its independence.

Wavell did not intend to include a description of his journey to the holy city of Mecca, but apart from his accounts of Yemen he admits in the preface that the present work breaks no new ground. The places he visited had already been described, possibly more extensively, by other explorers and travellers, but a journey to Mecca and Medina was still quite out of the ordinary for Europeans, and thus a description of his experiences was added to the work. It was first published in 1912 and the present copy was a part of the second impression of that edition, which appeared in 1913. An edited, smaller and thus cheaper second edition appeared posthumously in 1918. The chapters on Wavell's travels in Yemen had been removed and an introduction by Major Leonard Darwin, son of the naturalist Charles Darwin, had been added.

Arthur John Byng Wavell (1882-1916) was an English army officer and traveller who was educated and trained at the Royal Military college Sandhurst. He was a cousin of the decorated field marshal Archibald Percival Wavell, 1st Earl Wavell, who served in the Second Boer War, in other parts of Africa, and in India where he also served as the Viceroy. The author of the present work resigned his army commission in 1906 and went to Mombasa in British East Africa - modern Kenya - where he learnt Arabic and Swahili and where his desire to explore Arabia and even visit Mecca grew. After his travels in Arabia, described in "A Modern Pilgrim in Mecca", he returned to Africa. During the First World War he remained in Africa, where he founded a coastal defence force called the "Arab Rifles", active around Mombasa. Later he was sent to serve near the border of Kenya with Tanzania (then British East Africa and German East Africa), where he was killed in 1916 as a result of a German ambush.

Binding slightly rubbed, very slight foxing on the edges, some foxing on the first and last flyleaves. Small tear in the in the inner margin of the map, without affecting the map itself. Sharp folding lines in the plate of The Haram in Mecca (between pp. 152-152). With an ownership inscription: "R. S. Breene, 1 June, 1928" over the remnants of an erased inscription on the first flyleaf. 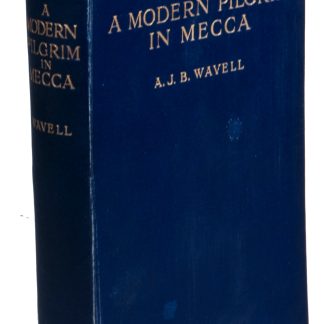