In Italian, to the Milanese gallery owner Vittorio Barbaroux, announcing that he will produce four new canvases ("quadri metafisici") inspired by the success of his metaphysical painting. De Chirico states that he has received all payments except one from Argentina, for which he asks his friend for help. In exchange, he offers him one of his works as a token of appreciation ("un mio ricordo in segno di riconoscenza"). He reassures him as to the quality and subject matter of the works with which he will soon entrust him for his Milan exhibition, giving their dimensions: "Ettore e Andromaca - mis. 100 x 70; Interno metafisico - 97 x 68; Trovatore - 63 x 50; Piazza d'Italia - 95 x 70", all of which are said to be very beautiful and which he is in no hurry to sell. He warns Barbaroux of the young painter Piero Zuffi, an adventurer who sent him the picture of a painting for authentication. He considers this "quadro metafisico con biscotti" a fake, and has given Zuffi a reply to this effect. Zuffi, having just returned penniless from a sojourn in France, would go on to enjoy a successful career as a theatre designer at Giorgio Strehler's Piccolo Teatro, then at La Scala in Milan. 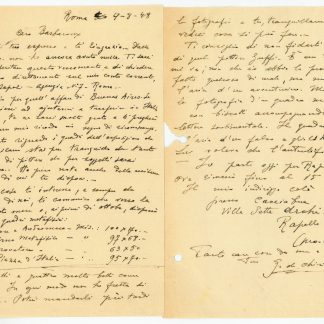