4to. (8), XII, 272 pp. With several illustrations in the text. Original printed wrappers.

First edition. Important historical study on navigation in the early modern Muslim world, including extracts of the "Kitâb ül Muhit" by the Ottoman voyager Seydi Ali Reis (1498-1563) in English translation. Further, it comprises French commentaries on the works of the Arab navigators Sulaiman Al Mahri (1480-1550) and Ahmad ibn Majid (ca. 1432-1500), the latter long considered the pilot of Vasco da Gama. Also discusses nautical instruments used by the Arabs, the practices of the native mariners of the Coromandel coast in navigating, sailing and repairing their vessels, Madras artillery, and the origin of the wind rose, as well as the invention of the compass. The present volume was produced as the first of the "Bibliothèque des Géographes Arabes" series published under the direction of the French orientalist Ferrand.

In excellent condition, uncut and untrimmed as issued. 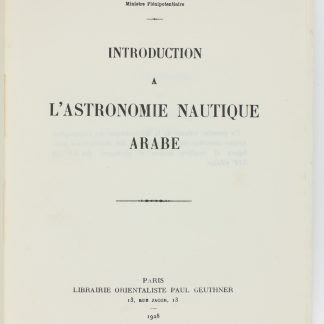