First German edition of Thornton's treatise on monetary theory, "An Inquiry into the Nature and Effects of the Paper Credit of Great Britain" (1802), translated by Ludwig Heinrich Jakob.

Binding rubbed and bumped. Interior lightly browned as common. Provenance: from the library and with the extensive annotations of the Austrian political economist Wilhelm Neurath (1840-1901), with his ink ownership to flyleaf. He was the father of the economist and philosopher Otto Neurath (1882-1945), a leading figure of the "Vienna Circle". It was almost certainly through Otto Neurath that the volume entered the library of the economist Oskar Morgenstern (1902-77), from whose descendants it was acquired. In collaboration with the mathematician John von Neumann, the German-born Morgenstern, who had taught in Vienna before relocating to Princeton in 1938, founded the mathematical field of game theory and its application to economics. 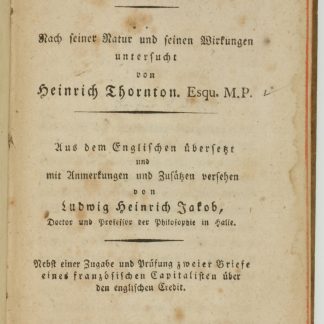