First Dutch edition. The standard work on Japan which "was for more than a century the chief source of Western knowledge of the country" (DSB). The first historically and scientifically accurate description of Japan, this major work comprises the first biography of Kaempfer and an account of his journey, a history and description of Japan and its fauna, a description of Nagasaki and Deshima, a report on two embassies to Edo (now Tokyo) including descriptions of the cities visited on the way, and 6 appendices on tea, Japanese paper, acupuncture, moxa, ambergris, and Japan's seclusion policy. The illustrations depict ports and scenery, costumes, characters, temples, ceremonies, Japanese fauna and flora, ships and coins, as well as mythological figures like the Buddhist goddess Quanwon. Furthermore, the work comprises a large folding map of the Empire of Japan, folding city plans of Nagasaki and Edo, and seven regional maps showing Kaempfer's itinerary.

Engelbert Kaempfer (1651-1716) was a professor from Lemgo, Germany, who joined the Dutch East India Company as a physician in 1685. After periods in India and Indonesia he travelled in 1690 to Japan to work as a doctor in Dejima (Deshima), the Dutch trading post and factory in Nagasaki and one of the few places where Western and Japanese people were allowed to interact. During his three-year term of duty, Kaempfer was twice allowed to journey to Edo (Tokyo) in the company of the head of the factory. After his return to Europe he wrote a number of works but did not publish them, leaving them in manuscript at his death. Sir Hans Sloane acquired these manuscripts, along with his drawings and herbarium, and arranged for their translation and publication. The first to appear was "The History of Japan" in 1727, here offered in Dutch translation. This work established Kaempfer's reputation as the 18th century authority on Japan and deeply influenced Japan's image in Europe. 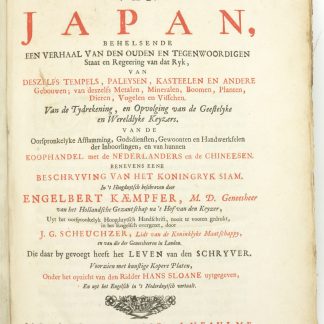