Cross-cultural mapping of the Red Sea: Bruce's chart in an early Egyptian copy

A hand-drawn map of the Red Sea region of Arabia, based on a Western map but with compelling provenance from early 19th-century Egypt, where it was apparently prepared, bearing contemporary Arabic notes on the reverse. While based on the excellent map published in James Bruce's "Travels to Discover the Source of the Nile" (1790), a more exact work of cartography than previously available and originally titled "Chart of the Arabian Gulf with its Egyptian, Ethiopian and Arabian Coasts", the present manuscript copy is to a different scale and features an enlarged, improved detail showing only the Red Sea and its environs, revealing a particular local interest in the region during the early 19th century. The Egyptian copyist follows the coast from the Sinai Peninsula along what is today south-western Saudi Arabia as far south as Mocha in Yemen, and includes the holy cities of Mecca and Medina. The copy bears a French title, with the date 1827, in a cartouche at the lower left. A French translation of Bruce's work appeared in 1790-92, but no edition was published in 1827, which may therefore be presumed to be the date of execution of this copy.

The Arabic inscriptions on the map's otherwise blank verso include one by Ibrahim Khwajah al-Sarraf (i.e. Ibrahim Khwajah the moneychanger), dated "Misr 1223" (Cairo/Egypt, 1808/09 CE), which appears to indicate that the sheet of paper was made well before the map. Another inscription is signed "Sikandariyah 1244" (Alexandria 1828/29 CE), along with a religious invocation apparently including part of the genealogy of Jesus Christ from the Gospel of Matthew. 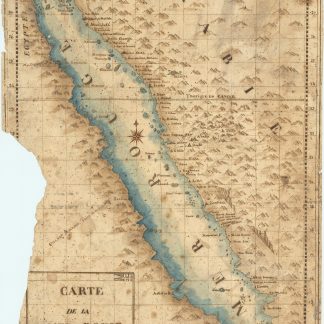