First edition of this early, albeit illegal collection of Lenin's works, containing some of the principal writings of Bolshevism. Includes the important preface by Lenin, advocating an organization of professional revolutionaries.

In 1907, the Zerno Book Publishers, directed by M. S. Kedrov, decided to bring out a three-volume collection of Lenin’s works under the general title "Twelve Years". The first volume, which is present here, contains seven important political publications: "The Economic Content of Narodism and the Criticism of it in Mr. Struve's Book", "The Tasks of the Russian Social-Democrats", "The Persecutors of the Zemstvo and the Hannibals of Liberalism", "What is To Be Done?", "One Step Forward, Two Steps Back", "The Zemstvo Campaign and Iskra's Plan", and "Two Tactics of Social-Democracy in the Democratic Revolution". The volume, which came off the press in November 1907 (the cover gives the date 1908), was confiscated soon after its appearance. The second volume was to appear in two parts: "The Agrarian Question: Part One" was published in January 1908 under the pseudonym "VI. Il’in". For the second part, Lenin wrote "The Agrarian Programme of Social-Democracy in the First Russian Revolution, 1905-1907". The galleys and manuscript of this work were confiscated by the tsarist security police, and were destroyed. However, a part of the edition was saved, and the book continued to circulate illegally. 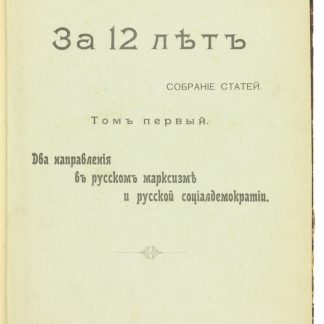