Noted essay on the physique of the Anglo-Arabian horse, challenging the theory of its over-lightness and insufficiency - the "gravest and most unjust" criticism levelled against the breed. Prepared by the vice-president of the prominent Toulouse stables "Écurie coopérative du Midi", Claude Marty. Of the utmost rarity: a single library copy traceable internationally (French National Library).

The main part of this work is made up of highly informative tables, displaying the distribution of the various breeds in the French, Algerian, Spanish, and Prussian cavalry forces, specifying their origins, as well as weights and body measures, and occasionally even stating their given names. Several other tables show the use of the Anglo-Arabian for public transportation in Toulouse. The work concludes with remarks on the Anglo-Arabian's high bone density and their physical ability to set vehicles in motion. 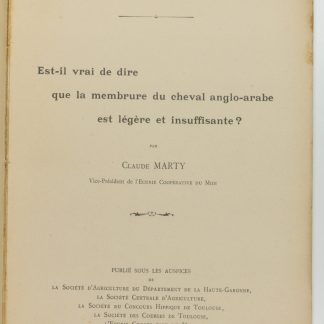