The third Grüninger edition, the first to include the numerous specially made smaller woodcuts that adorn the text, hand-coloured throughout in this copy. The full-page illustrations are repeated from the 1496 and 1499 incunabular editions. The woodcuts showcase Grüninger's method of using a large number of separate blocks in ever-changing combinations to create new images: "En 1503, Grüninger publie une édition de Térence avec 745 gravures de l'édition de 1496, dont 86 différentes et 19 nouvelles" (Ritter, Histoire de l'imprimerie alsacienne, p. 92 and cf. 88). The anonymous artist, soon to become Grüninger's favoured illustrator, went on to be known as the "Terenz-Meister" for the lively and attractive illustrations he created for this book. With the commentary by Aelius Donatus and Calphurnius.

Provenance: Two 17th c. manuscript ownerships "S. de Bucquoy" and "A. Avador (?)" on title-page. Later by tradition in the library of the Fraeylemaborg chateau at Slochteren, Netherlands. 19th century engraved armorial bookplate of the Six van Hillegom family of Amsterdam; sold from the estate of the art historian Jan Six (1857-1926). 20th century bookplates of the Amsterdam physician and bibliophile Bob Luza (1893-1980), whose library was sold by Van Gendt & Co. in 1981, and of the musician and Holocaust survivor Helge Loewenberg-Domp (1915-2021). Old catalogue clipping and typed description to front pastedown. No other hand-coloured copies of this edition traced in the trade. 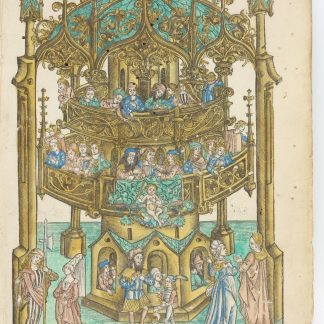