A Structure for Deoxyribose Nucleic Acid

[DNA structure]. Crick, Francis; Watson, James Dewey; and others. The milestone papers on the structure of DNA in "Nature", vols. 171 and 172.

All the five issues of "Nature" in which, between February and October 1953, the crucial papers were published that revealed to the world the double-helix structure of DNA. Some of the various authors were collaborators, others competitors, and while the credit for the discovery is today almost entirely attached to the names of Crick and Watson, their breakthrough depended on experimental work done by all the other scientists whose relevant papers were published in the same journal and are also here included.

Together these papers provide the single most important advance in biology since Darwin's theory. The first, by America's leading chemist of his age, Linus Pauling, ultimately contributed least because Pauling's theory erroneously suggested a triple-helix structure. "Instead, victory fell to an unlikely quartet of scientists in England who didn't work as a team, often weren't on speaking terms, and were for the most part novices in the field" (Bryson, A Short History of Nearly Everything, p. 487f.). These were the American wunderkind James Watson and his older colleage Francis Crick at Cambridge; the brilliant but often overlooked Rosalind Franklin (with her student Raymond Gosling), working at King's College London; and the New Zealand-born Maurice Wilkins, also at King's but who communicated to the competition at Cambridge Franklin's key findings - particularly, an X-ray photograph showing the DNA molecule's basic shape and dimensions, which provided Watson and Crick with the crucial clue. It was by then known that "DNA had four chemical components - called adenine, guanine, cytosine and thiamine - and that these paired up in particular ways. By playing with pieces of cardboard cut into the shapes of molecules, Watson and Crick were able to work out how the pieces fit together. From this they made a Meccano-like model - perhaps the most famous in modern science - consisting of metal plates bolted together in a spiral, and invited Wilkins, Franklin and the rest of the world to have a look. Any informed person could see at once that they had solved the problem. It was without question a brilliant piece of detective work" (Bryson, p. 491f.). Less than two months later, their paper, "Molecular Structure of Nucleic Acids: A Structure for Deoxyribose Nucleic Acid", appeared in "Nature". Franklin's own paper, in the same issue, shows the now-famous X-ray diffraction image of DNA fiber and pointedly concedes that "our general ideas are not inconsistent with the model proposed by Watson and Crick in the preceding communication" (vol. 171, p. 741).

For the discovery of the DNA double helix, Crick, Watson, and Wilkins shared the 1962 Nobel Prize in Physiology. Franklin had passed away four year earlier at the age of 37, a victim of the X-rays to which she had over-exposed herself in her work.

Tightly bound and in excellent condition throughout. 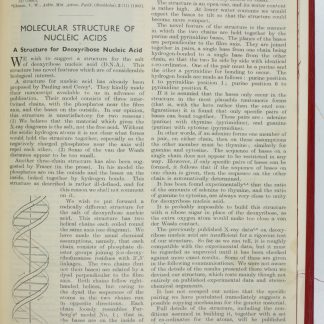