To "cher citoyen", i. e., Juste Vernouillet in Paris, director of the publishing house Lachatre & Co. in the absence of Maurice Lachatre, who was still exiled in San Sebastian, Spain, for his role in the Paris Commune.

In connection with the ongoing translation of "Das Kapital" into French, Marx writes that it has been nearly two weeks since he announced to the printer, M. Lahure, that he would send him more copy. "Unfortunately, I fell ill and needed to stay in bed until yesterday. I was thus prevented from correcting the manuscript, and I could only resume work after a few days. This is an unpleasant incident". Marx further inquires after the latest postal address of Joseph Roy (1830-1916), his Bordeaux-based translator.

Severely overworked with revising Roy's translation for Lachatre's ongoing publication of "Le Capital" and completing the revised second German edition for his publisher Otto Meissner in Hamburg, the final corrected proofs of which he had sent Meißner at the beginning of the month, Marx had fallen ill in April and would suffer from intermittent bouts of headaches and insomnia until August.

Traces of old folds. Recipient's note to upper margin, some offsetting from similar notes to verso. 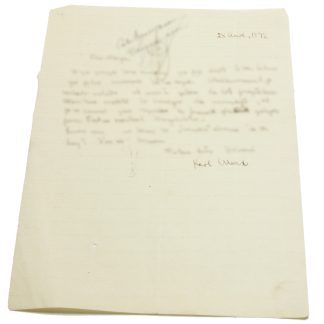