To his publisher Maurice Lachâtre, who in late 1873 had moved from San Sebastian, Spain, to his new exile in Belgium, as he was still wanted by the French police for his role in the Paris Commune. Marx writes that he took the waters at Karlsbad for five weeks and "will be leaving Germany in a few days to return to London. I believe that my health is restored and that I will now be in a condition to complete the French edition once and for all. If I pass through Belgium - I have not yet decided on my travel route - I will be happy to go and see you". With one textual correction by Marx. In a postscript, he adds that he just read in the newspaper "La Patrie" a review of "Le Capital" by a certain Gaussen: "This gentleman never had the book in his hand. He dares to quote, in quotation marks, entire passages which are his own creation and which he has the impudence to attribute to me".

Suffering from insomnia and headaches due to severe overwork, mainly from labouring on "Capital", Marx spent a month from 19 August to 21 September at Karlsbad. Staying at the Hotel Germania, he frequently met the Social Democrat Louis Kugelmann and his family, but the relationship cooled after a falling-out earlier in September.

Traces of old horizontal fold. A few wrinkles and creases, especially in the margins; some old paper flaws in the lower half of the leaf, mostly confined to the lower margin and lower right edge, but no loss to text. 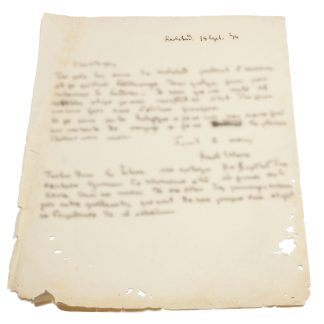