8vo. Together 2 pp. With autograph addresses and an envelope.

Following his long years of exile, fighting for Hungarian and later for Italian independence on the side of Giuseppe Garibaldi and advancing to the rank of a general during the Expedition of the Thousand, Türr was active as a diplomat, peace activist, and engineer. As such he was involved in the first Panama Canal project and the successful construction of the Corinth Canal from 1881 to 1893. Türr died in Berck in Northern France.

Traces of folds. The dated letter with an old repaired tear and a collector's note in ink. 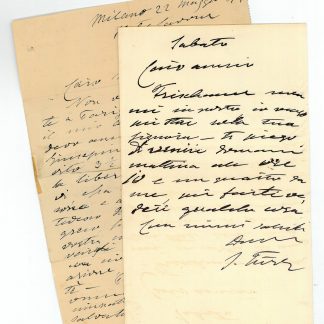