The Man in the Moon: one of the first works of Science Fiction

Second French edition, translated by Jean Baudoin. First published in English as "The Man in the Moone" in 1638, five years after the author's death in 1633, who probably wrote it in the late 1620s. One of the earliest works of science fiction, the book is notable for its role in what was called the "new astronomy", the branch of astronomy influenced by Copernicus.

Although Copernicus is the only astronomer mentioned by name, the book also draws on the theories of Kepler and William Gilbert. Godwin's astronomical theories were greatly influenced by Galileo Galilei's "Sidereus Nuncius" (1610), but unlike Galileo, Godwin proposes that the dark spots on the Moon are seas - one of many parallels with Kepler's posthumous "Somnium", which Godwin could not have known. Swift is said to have been indebted to this work for some of Gulliver's "Voyage to Laputa".

Provenance: ink stamps of "Archives du Département de la Loire" to title-page, p. 23 and p. 141. Later in the aeronautical library of the New York banker William A. M. Burden (1906-84), a successful Wall Street analyst of the then-fledgling aviation industry since the 1920s, later sometime director of Lockheed and United Airlines and Special Assistant to the Secretary of the Air Force (his bookplate to front pastedown). Latterly in the library of fantastic fiction assembled by the U.S. collector Gary Munson. Very rare, only two copies in OCLC (Augsburg and Gotha), none in the US. 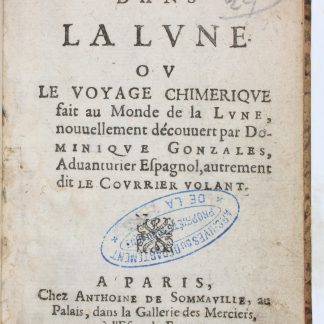