First draft for the lied "Neue Liebe, neues Leben", a setting of a 1775 poem by Johann Wolfgang von Goethe, begun in late 1798. The present sketch, jotted down without interruptions in a very cursory, almost rushed hand already contains the melody and the words with no expression markings, but includes occasional bass sections as well as parts of the piano accompaniment at the end of verses; it shows several important departures from the version printed in 1810. At the head of the page, written in a different ink and pen and comprising the first four staves, are the first eight bars of the finale of Beethoven's String Quartet No. 1 in F major (Op. 18, No. 1, composed between 1798 and 1800, published in 1801), providing the violin voice with the theme chorus of triplets.

The lied in its present version (WoO 127) was published in early 1808, nearly a decade after this first sketch, by Simrock in Bonn as the first part of the "III deutsche Lieder", apparently without the composer's consent. Beethoven subsequently revised his work (the manuscript of that revision, dated "1809", is today kept at the Beethoven Haus in Bonn) and published it the following year with Breitkopf & Härtel in Leipzig as part of his "Sechs Gesänge" (Op. 75, No. 2). "Il s'agit du monologue d'un amant que la rencontre d'un nouvel amour a bouleversé au point de ne plus savoir où il en est : sa tentation est alors de fuir ce qui le rend étranger à lui-même" (E. Brisson). In 1811 Beethoven presented a manuscript copy of that second version, the first leaf of which is also kept in Bonn (while most of the remainder is at the Pierpont Morgan Library in New York), to Bettina Brentano on the occasion of her wedding to Achim von Arnim. Nohl has pointed out that the present first draft with its "dramatic, aria-styled phrasings" retains a somewhat "grandiose and dark quality" as compared to the reduced later version, and "if one were to interpret the urgent stride so vividly apparent in this sketch, dashed off, as it seems, without a single interruption and in a mood of deep emotional excitation, then one feels instinctively that forces of an even greater passion than such as Bettina could have aroused in Beethoven must have been at work here" (cf. p. 695).

Beethoven manuscripts written before 1800 almost never come to market; no other complete autograph manuscript of this version is known. The two leaves formerly were a single bifolium owned by baroness Anna von Gleichenstein, the sister of Beethoven's friend Therese Malfatti (remembered as a possible dedicatee of "Für Elise"), which was soon separated. Even in 1865, when Nohl edited the first leaf, its counterpart was no longer in the possession of the Gleichenstein family. The first sheet later surfaced in the archives of the music publisher Schott in Mainz and was sold at Sotheby's in 2002 (6 December, lot 14: £65,725). The second leaf was offered in 1968 by Hans Schneider of Tutzing in his catalogue 136 (lot 37, DM 17,800; then again in cat. 142, lot 266, with illustration on p. 45) and was acquired in 1969 by a private collector who had it auctioned by Venator & Hanstein in Cologne in 2011 (cat. 118, lot 861: EUR 108,000). Now that both leaves have been reunited, Hans Schneider's words, written half a century ago about only the final 62 measures, are no less true: "Through Beethoven's synthesis of his own music with a text by Goethe we are presented with a musical autograph as desirable as it is beautiful" (cat. 136, p. 37). 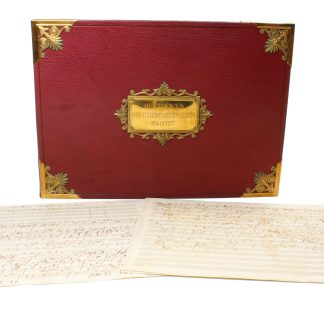