4to. (½+1 =) 1½ pages on 2 ff. With two autogr. envelopes. The musical quotation on 4 pages in-8 mimeographed concert programme. Several addenda.

Interesting set addressed to the American commander of Garmisch, after the defeat of Germany. Major Herbert L. Snapp (1901-91) was the officer of the American occupation troops, appointed "Stadtcommandant" of Garmisch, where Strauss resided.

1) Garmisch, 8 May 1945. On the very day of the armistice and the end of the war, Strauss greets Commander Snapp as the representative of the great American people ("als hiesiger Repräsentantendes grossen amerikanischen Volkes") on this day of peace ("zu dem heutigen Friedenstage") and warmly expresses the wish that America, friend to the arts, as it has delivered Germany from an undignified slavery, will in a beautiful future extend its protection to the descendants of Goethe and Wagner for the reconstruction of the country and its culture.

2) Garmisch, 12 May 1945. Strauss asks for driving licenses and, for his son, daughter-in-law and grandson Richard, hunting licenses, so that his family can feed itself.

On a mimeographed concert programme, given by the students of the Music Department of St. Mary of the Springs on 12 April 1945, Richard Strauss inscribed a 3-bar quote from the beginning of the Rosenkavalier, with the inscription and signature.

Attached is an autograph letter from "Daddy" (i. e. Snapp) to his daughter Nancy, sending her, with comments, these documents, and a letter draft to Strauss in which the American military government makes three reassurances, "all of which will be in direct contrast to the period 1933-45" (written on the reverse of a stationery with printed letterhead of the Reichsministerium des Innern). 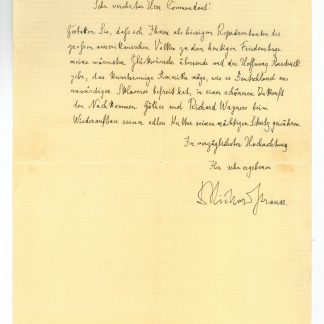