"One of the masterpieces of spatial economics, weaving together the classical theory of Thünen and Weber with the newer emphasis on demand" (Blaug, Who's Who). The book was published in English as "The Economics of Location" in 1954. August Lösch (1906-45) studied in Freiburg with Eucken and in Bonn with Schumpeter and Spiethoff. "Die räumliche Ordnung" is his most important work. It "dealt, in most general terms, with general equilibrium theory applied to space. Distance itself becomes the central phenomenon [...] Lösch presents a Walrasian model with distance built in as a system of coordinates of location. His most famous contribution, however, is the analysis of the structure of an economic landscape [...] His is probably the most original book published on economics in the German language between the two world wars. Most scholars would consider themselves lucky if they had added a few bricks to an existing wall. Only few scholars can claim to have started a new wall, and even fewer to have started a new building. Lösch is one of those few scholars".

Inscription slightly trimmed by the binder. A good copy. 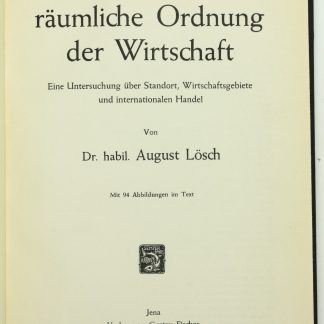