Ideas for the study of Latin from the inventor of electromagnetism

Probably to the politician and writer Jean-François Roger, editor of a bilingual edition of Joseph de Jouvency's "Appendix de diis et heroibus poeticis" for the study of Ovid. Ampère was charged by the "Commission des livres classiques" of the ministry of public instruction to evaluate the possible use of this publication as a textbook. He advises against discarding any parts of the notes: "indispensable for a beginner who would study alone, they cannot be regarded as useless for students in the various institutions of public instruction" (transl.). Ampère lauds the translations in "correct French" as "the best manner to make difficult passages understood". The only problem would be "the impossibility to examine pupils based on a copy of the book, where they see what they need to say at the bottom of the page". Therefore, Ampère conceives a system of cross-references that would allow for separating text and translation. But he immediately rejects his own ideas since they "probably have no foundation" and he might appear a second-guesser ("faire complètement le gros-jean").

Ampère only calls the book in question "Appendix", and it is not quite clear to which edition he refers. Jean-François Roger (1776-1842) had first published his Latin-French version in 1806 and several editions followed when it was adopted as a textbook by the "Commission des livres classiques". Both Roger and Ampère were members of the Commission, and as Ampère addresses the recipient as his colleague, it is very likely that this was indeed Roger.

With a collector’s note in pencil. Minor browning. 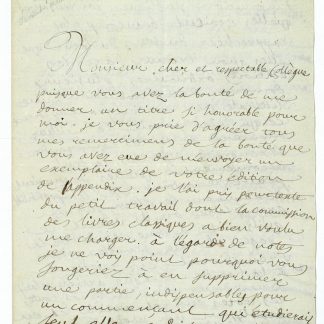