Lenin in the Kremlin courtyard

A contemporary silver gelatine print of one of the best-known portraits of Lenin, showing the Russian revolutionary in the courtyard of the Kremlin, during a walk in the autumn sun.

At the time, Lenin was recovering from the serious wounds he had suffered during an assassination attempt on August 30th. Both bullets, supposedly fired by the Socialist Revolutionary Fanny Kaplan, were still embedded in his body, but Lenin had taken up work again. To prove to the eyes of all Russia, still struggling in civil war, that reports of Lenin's survival and improving health were not mere propaganda, his secretary and close associate Vladimir Bonch-Bruyevich talked the publicity-averse Soviet leader into the courtyard stroll that he directed towards a carefully hidden film team. The friendly ambush, led by the Russian photographer and filmmaker Alexander Vinkler, was soon discovered, and in addition to the several minutes of footage, a few photographs were taken.

The present famous shot is usually credited to Vinkler himself, though some sources cite the Kremlin photographer Petr Otsup. It was widely reproduced throughout the 1920s and 1930s: as early as 1920, the American communist Isaac McBride reproduced it in his book "Barbarous Soviet Russia", and it served as the model for several portraits in the Soviet Realist style, including Isaak Brodsky's famous painting of "Lenin before the Kremlin" (1924, now in the Lenin Museum, Moscow). It is also visible in the background of Alexander Rodchenko's 1935 portrait of Regina Lemberg peering through a Leica.

Includes a less strongly cropped print of the same image, stamped and annotated on the reverse with the distributor's English caption, showing that it was used to illustrate a newspaper report about Lenin's death on 21 January 1924. His end was hastened by several strokes, very probably complications from the assassination attempt and later necessary operations. 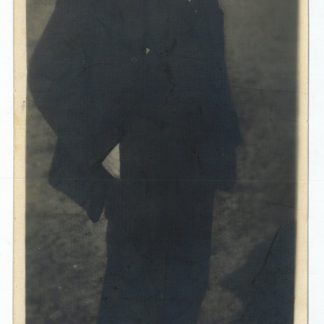