The Pilgrim's Progress in Danish - no copy in U.S. libraries

12mo (90 x 149 mm). (8), 604 pp. (including engraved frontispiece of a pilgrim knocking at the gates of Heaven). Bound in early 20th-century crushed calf with gilt-and-brown title label on spine. Purple private ownership stamps of "N. Chr. Pedersen" of Svendborg on letterpress title and a few leaves of prelims. Insignificant tear to margin of frontispiece, well outside of engraved image; contents certainly dusty, but well-preserved.

Excessively rare, early edition of the first translation of Bunyan's "The Pilgrim's Progress" into Danish. Written while Bunyan was in prison for his extreme Puritanism, this extended allegory enjoyed popular translations in other Protestant countries during the late 17th and early 18th centuries. "It is [the] image of Bunyan as English that has come to dominate the way he is remembered today. In both the popular and academic domain, Bunyan stands as an icon of Englishness. Indeed, existing Bunyan scholarship is almost obsessive in its focus on him as a national figure of 17th-century England. His broader transnational presence is largely excised from the critical record" (Hofmeyr, The Portable Bunyan: A Transnational History of The Pilgrim's Progress, preface).

The two English parts were first published in 1678 and 1684 respectively, and the present translation by Jens Godsen first appeared in 1704-07. However, as a pocket-sized specimen of vernacular literature, it seems to have survived exceptionally poorly in all editions. We have been able to trace just two copies of any 18th century edition outside of Denmark, residing at Oxford and the British Library (1732); the latter however is in lamentable condition, lacking over 100 pages and with title-page "mutilated". The only record listed in RareBookHub is a Quaritch catalogue entry, where a copy of the 1758 edition was offered in 1971 for a princely $48.

OCLC 911248490 (giving a collation). Not noted in Hofmeyr, The Portable Bunyan: A Transnational History of The Pilgrim's Progress (2004), who does however note the first Swedish translation of 1727. 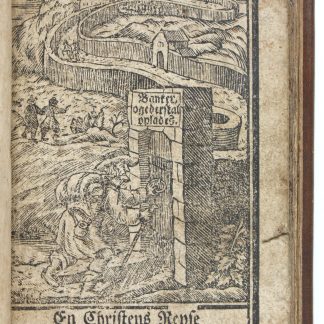