The first printed travel report of the Middle East, including the first Arabic alphabet in print

Editio princeps of the first modern travelogue of a journey from Venice to the Holy Land, and "the first illustrated book of travel ever printed [...] [T]he folding panoramic views [...] are the first authentic representations of the famous places depicted, i. e., the ports usually visited by every pilgrim of the period [... The] artist was Erhard Reuwich [..., who] graphically record[ed] the impressions of the voyage" (Davies). The splendid panoramic folding views show Venice (ca. 160 cms long!), Porec and Corfu (both ca. 40 cms), Methoni, Crete and Rhodes (all ca. 80 cms) as well as Jerusalem (ca. 130 cms).

This work is considered the first authentic Western source for the Near and Middle East, as the illustrations were prepared from actual observation of the lands and people described. Breydenbach travelled to the Holy Land in 1483/84 with a large party including the artist Reuwich from Utrecht. Following the traditional route, they travelled from Venice to Corfu, Modon, Crete, Rhodes and Jaffa before arriving in Jerusalem, and then through the Sinai desert to Mt. Sinai, Cairo, and Alexandria on the return journey. The book quickly became extremely popular and was translated into French, Dutch and Spanish before 1500. It includes illustrations of Middle Eastern and Bedouin costume, a glossary of common Arabic words, and pictures of animals encountered on the journey (including a crocodile, a camel, and even a unicorn), as well as an Arabic alphabet - the latter of especial importance for being the first of its kind ever to see print: "The first representation of Arabic letters in a printed book was done in Germany; this was the woodcut of the Arabic alphabet in Bernhard von Breydenbach's 'Peregrinatio'" (Toomer).

Title-page trimmed to the neatline, remargined on all sides, a narrow strip along the left edge as well as a tiny ornament at the bottom supplied in meticulous ink. A témoin to upper corner of a single leaf (not touching text), another leaf showing a short tear near the gutter and traces of old glue; lower corner of final leaf remargined. Dry-cleaned throughout very carefully, the paper retaining light browning and occasional fingerstains. The views are very well preserved throughout and present as entirely complete, although some have small portions supplied from other copies of the same edition or are professionally retouched: some 22 cms in the middle section of the view of Venice are barely noticeably supplied in ink, and three segments are from another copy; tiny flaws in the folds. One fold in the view of Methoni is rebacked with a tiny gap. One half of Crete and Rhodes each supplied from another copy, seguing into each other in professionally drawn ink retouchings measuring ca. 2 cms. Right half of the view of Rhodes trimmed to neatline and remargined; a few professionally restored edge tears. The spectacular view of Jerusalem, frequently lacking, is complete and uncommonly well preserved, showing only are few well-restored edge tears. Altogether an outstanding copy on strong, unusually wide-margined paper, splendidly bound in the early 19th century.

The present first edition is extremely rare in the trade, usually appearing only in severely mutilated copies or even in fragments comprising no more than a few leaves. The only similarly complete copy in auction records since 1900 was the Perrins-Wardington copy (complete), sold at Sotheby's in 2005 for £265,600 (today, ca. EUR 500,000), while the Consul Smith copy sold at Christie's in 2018 lacked one quire consisting of the Jerusalem view and 2 woodcut scenes, as well as about half of Venice and Rhodes views.

From the library of the great English bibliophile Thomas Edward Watson, 1st Bart. (1851-1921) with his engraved bookplate ("St. Mary's Lodge, Newport Monmouthshire") on the front pastedown; old bookseller's catalogue clipping mounted to flyleaf and pencil annotation: "This is a far finer copy than the B[ritish] M[useum] Copy ..., that being badly coloured & much wormed". Last in a noted German private collection and acquired directly. 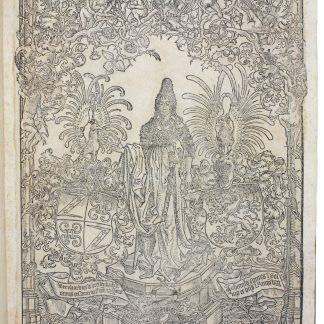