The founding document of communism: a previously unknown copy of the extremely scarce first issue of the first edition, owned by a Rhenish counsellor of justice in the 1860s.

Of this first printing, only 27 copies are known worldwide: the 26 enumerated in Kuczynski's census and one more, sold in Hamburg in 2001. So rare is it that Kuczynski's statement, made in 1995, today requires almost no qualification: "In vain will specimens of the first edition of the 'Manifesto' be sought in the world's great libraries. Neither the Library of Congress in Washington nor the Lenin Library in Moscow, neither the British Museum in London nor the Bibliothèque nationale in Paris, not the Vatican's Bibliotheca Apostolica nor Berlin's Staatsbibliothek own a copy. All that is left is held by specialist historical libraries or archives, was acquired in passing with posthumous papers or bought and sold by private collectors" (cf. p. 78).

Previous to this copy, only four examples passed through the international postwar book trade: that formerly in the collection of Salman Schocken (Kuczynski B6c: Hauswedell 211 [1976], lot 574 = Christie's Paris, 2008, lot 12); that of Eduard Wiss (B4-6b: Sotheby's 1986, lot 159 = Christie's 1991, lot 314); the Rehdiger copy (B5b: Sotheby's 2006, lot 93); and a copy unknown to Kuczynski (Hauswedell 356 [2001], lot 428). Excepting the Schocken copy, which was acquired by the British Library, none of these recently-surfaced specimens went to institutional collections, and to this date the BL remains the only major research library in the world that has succeeded in acquiring the much-coveted first edition of what is universally admitted to be "one of the outstanding political documents of all times" (PMM). Even the great Karl Marx exhibition held in 2018 at China's National Museum in Beijing to mark the 200th anniversary of Marx's birth, as well as the Chinese National Library's 2021 exhibition, dedicated specifically to the Communist Manifesto and co-hosted by the CPC's Zhejiang Provincial Committee, were unable to source a copy, although the 2021 exhibition showed no fewer than 306 versions of the book in 55 languages.

Quite insignificantly and evenly browned throughout due to paper stock. Pages 7-10 trimmed fairly closely at the lower edge by the binder's knife, leaving the last line of page 7 slightly shaved (minimal loss but still legible) and descenders of "g" and "z" barely touched on page 8. Minute paper abrasion to the word "aufgehoben" in the last line of page 14; the printed letters transferred to the opposite blank margin. A small browned rectangle in the gutter of pp. 14/15 (ca. 3.5 cm), apparently due to formerly inserted small slip of paper; light offsetting from the original ribbon bookmark on pp. 18/19. Altogether in excellent condition, showing the characteristics of variant B4-6 as called for by Kuczynski: 23 pages, p. 17 numbered correctly, misprint "heraus beschwor" in the last line of p. 6; cover variant undeterminable (but traces of the original green wrapper's colour are evident in the gutter of the title). Tantalizingly, the entirely contemporary binding's spine title reads "Marx, Manif[est] und Katech[ismus]": an uncanny echo of the work's catechetical form as originally envisaged by its authors before Engels, in November 1847, suggested the word be abandoned in favour of "Manifesto". Is this a mere misreading of the title by the bookbinder - or was he possibly a member of the "Bund der Kommunisten" who was acquainted with the genesis of the work and Engels's "Communist Confession of Faith", as the draft version of the Manifesto was called?.

Provenance: from the library of the Elberfeld district court consellor and justice Peter Kremer with his autograph ownership in blue ink to the flyleaf, noting the edition's rarity even then: "Selten. // P. Kremer / Elberf. 14/3. [18]63". Latterly in a Rhenish private collection. 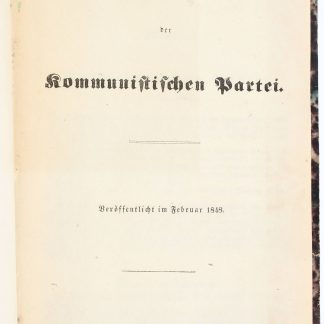