Oblong 8vo (170 x 145 mm). (14) ff. on sturdy cardboard, 12 of which being full-page chromolithographs showing an illustrated score by Haydn and scenes commemorating events in Vienna during the Napoleonic War of 1809. White original leather binding, upper cover title elaborately stamped in black, red, and gilt. Endpapers decorated with the arms of Vienna printed in red and gold. All edges gilt. Housed in the original decorative moirée-lined box finished in the style of the Wiener Werkstätte.

Only edition. A striking favour for those in attendance of the 1909 Viennese State Ball, held to commemorate the centenary of the second conquest of Vienna by Napoleon. Further shows portraits of the Vienna mayors Stephan von Wohlleben and Karl Lueger, as well as the poem "Gott erhalte!" by Hermann Hango. Celebrating the also centenary of the composer Haydn, this book is a striking example of the elegant Secessionist design popular at this time. The designer, Remigius Geyling (1878-1974), was an Austrian painter, illustrator, and set designer who studied under Karl Krager at the Vienna Kunstgewerbeschule, where he later also taught. The beautifully designed binding with the Vienna arms was produced by Wilhelm Melzer in Vienna, who often worked for the Wiener Werkstätte.

Edges of box a little rubbed, but in excellent state of preservation. As common without the four-leaf booklet that gave the order of dances for the evening. 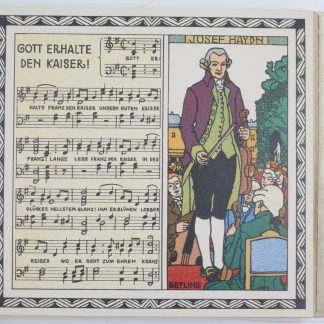