A late 18th century Indian manuscript copy of a celebrated treatise on horsemanship, the "Farasnama" ("The Coloured Book of Horses"). Constituting a Persian translation of the Sanskrit "Salihotra", its topics include horse-breeding, grazing, dressage, veterinary advice and horseracing.

The "Salihotra" is attributed to Durgarasi, son of Surgarasi, who is believed to have composed it for Mahmud Ghaznavi (d. 1030). A note on p. 2 of the present manuscript indicates that the text was translated from Sanskrit into Persian during the reign of Shah Jahan (d. 1666); other traditions give credit to 'Abdullah bin Safi, who was active under the earlier reign of Bahmanid ruler Ahmad Shah Wali (d. 1436). The present manuscript contains numerous coloured drawings of thoroughbred horses, along with observations on their salient traits, the illnesses to which they are prone, and prescriptions for their treatment. Their execution is an interesting illustration of the iconoclastic tendencies characterising painting under the later Mughal emperors.

Occasional slight traces of worming; some waterstaining to margins; some leaves remargined by an early owner. In spite of the loss of five leaves that would have contained an additional 21 horse illustrations, a fine manuscript in an attractive illustrated lacquer binding. 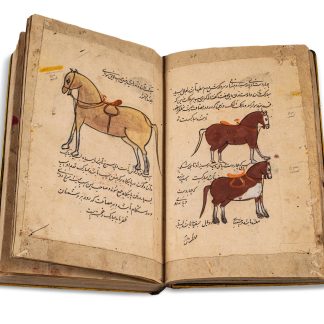