The alchemical manual of the chief physician to Emperor Leopold I

Hertodt's working alchemical notebook, written in a fluid mixture of German and Latin. The manuscript contains detailed instructions on alchemical processes, including the transmutation of lesser substances into gold (with first-person remarks on experiments), alongside a cryptographic alphabet and a list of inauspicious dates for the practice of alchemy. It is signed on the final page by its author "Dr. Hertodt" (f. 158r).

Johann Ferdinand Hertodt von Todenfeld was a German physician from Moravia (now in Czechia). He wrote a series of monographs on medical and natural philosophical topics, including a geological and botanical description of his homeland, the "Tartaro Mastix Moraviae" (1669), and the "Crocologia" (1671), a medico-scientific treatise on saffron, translated into English with a biography of the author as recently as 2020. He later became personal physician to Holy Roman Emperor Leopold I and a member of the German National Academy of Sciences "Leopoldina" (cf. Ferguson I, 400). As a recognised authority in medical matters, it is no surprise to see Hertodt call on the learning of his colleagues in the present manuscript. Sigismundo Fueger, Swiss professor of alchemy, whose mines Paracelsus worked as a younger man, is mentioned on f. 25r, for example, as is the German alchemist Basilius Valentinus on f. 35r.

Apparently complete, with contemporary foliation (also used here), and an autograph signature of the author on the final page. Pages have varying numbers of lines, in a single hand switching fluidly between cursive German and humanist Latin scripts following switches between the two languages. Foxed and browned throughout, the text has fading between ff. 104v-142r owing to the quality of the ink. The manuscript offers a singular, hands-on perspective on the working life of a royal physician and scholar in the 17th century Habsburg lands. 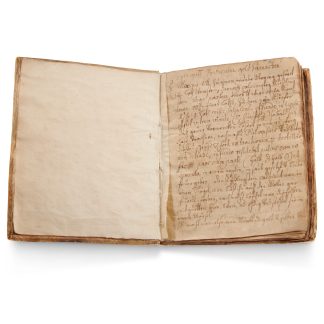