According to a collector's note, these are "References" for his multi-volume work "The History of Europe From the Commencement of the French Revolution to the Restoration of the Bourbons" with passages in Latin, French and English: "At the siege of Toulon, horrible atrocities of the Republicans. They murdered an old man of 84 only because he had 18.000.000. Alors vraiment said Napoleon a un tel spectacle Je me crus a la fin du Monde [...]".

The "History of Europe" proved a huge commercial success: by 1848, 100,000 copies had been sold in the United States alone. It was translated into French, German, and even Arabic.

Added and mounted to the same backing paper is an autograph letter fragment signed by the judge and scholar Lord John Murray (1778-1859): "Yours very respectfully [...]". 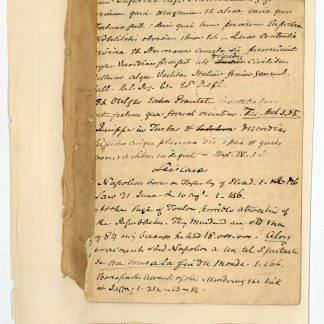