4to (165 x 227 mm). Arabic manuscript on paper. 44 pp. (22 ff.) with 5 full-page colour illustrations (one double-page-sized), all illustrated leaves consisting of two folios pasted together for reinforcement. 17 lines of text, per extensum, within green and double red rules, written in Maghribi style (with diacritic under the letter 'fa') in black, red and green ink; introductory first page written in a different hand in brown ink. 19th century Levantine binding in full red morocco with fore-edge flap, stamped in blind with rules, fleurons and ornamental oval medallions to both covers.

Pioneering Abbasid-era study of horsemanship and horse care: the work's only known manuscript in Europe, constituting the long-lost first volume of the set now in the National Library of the Kingdom of Morocco.

Titled "Kitab al-Furusiyah" (the "Book of Riding" or "Book of Horses", often referred to as the "Book of Farriery") or, in full, "Kitab fi al-'inayahbi al-khayl wa-sa'ir dawab al-rukub" ("On the care of horses and all other riding animals"), this encyclopedia of horse care was completed ca. 1200 CE. Ahmad ibn al-Ahnaf is known also to have composed a "Kitab al-Baytara" (Book of Veterinary Science) - possibly simply the same work by a different title, although some Arabic sources mention the titles separately. Ahmad was one of the earliest authors to write on the care of horses and possibly the first ever to include illustrations.

The present manuscript comprises the beginning of the work from chapter 1 to the first half of chapter 4. The introduction announces a total of 30 chapters, but no complete copy is known: the most extensive manuscript extant has 29 chapters, while specimens with 26 chapters are more common. As the later chapters are very short, these first four chapters make up more than a quarter of the entire work. They discuss, individually: 1) the study of milk teeth and permanent teeth; 2) the physical appearance and general characteristics of the horse, donkey, and mule; 3) the functions of the external parts of the body; 4) equestrianism and the various ways of mounting a horse.

The present volume completes the incomplete three-volume set in Rabat's National Library of the Kingdom of Morocco, which begins with the fifth chapter and fully agrees with the present manuscript in script, page layout, spelling and size (MS 6126, described in the "Chevaux et cavaliers arabes" exhibition catalogue, see reference below). The illustrations in the manuscript in the Royal Library, showing the identical almond-shaped horse eyes and characteristically rounded hooves, are clearly by the same artist, as well. The Rabat MS is dated Dhu'l-Hijja 1126 H (December 1714 CE) and thus provides the date for the volume at hand, although the style of penmanship would easily agree with a 17th century dating.

Upper corners of the first two leaves professionally restored with very little text loss. Some fingerstains and dust-soiling throughout, more pronounced in first and last page, suggesting that the manuscript probably had no binding before the 19th century. Frequent edge tears, confined to margins. Pigments somewhat chipped in the final, double-page-spread illustration. Altogether a beautiful specimen of an Arabic manuscript on equestrianism, and like all such manuscripts of the greatest rarity. 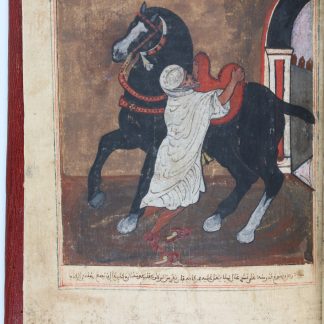