A rare "confidential" handbook on the Gulf

The most valuable of the Foreign Office "Peace Conference" handbooks, entirely devoted to the Gulf. An excellent example of the rare "confidential" issue, it features a large folding map and passages of text not included in public issue of 1920.

In the Spring of 1917 the Foreign Office started work on a series of handbooks for the use of British delegates attending the Peace Conference. Published in 1918 and 1919, the handbooks were only issued to officials and all were marked "Confidential" on the upper wrapper. By late 1919 it was decided that revised versions should be made available to the British public, printed in greater numbers and in green wrappers rather than the blue-grey of the confidential issue.

The present handbook, No. 81, focuses on the Gulf, dividing it into three geographic areas: the "Arabian Coastal Region" (the Eastern coast of the Arabian Peninsula, from Kuwait to Oman), "Head of the Gulf" (Basra Province and Khuzestan Province), and "Persian Littoral" (the Iranian coast). Each is described in detail, with sections on, inter alia, islands, ports, river systems, population and language. Separate sections on climate and sanitary conditions consider the region as a whole.

The second chapter on "Political History" is arguably the most important part of the handbook. In spite of its predictable, unquestioningly pro-British standpoint it offers a fascinating history of the Gulf States up to 1914, with concise histories of Muscat, Trucial Oman (the modern-day United Arab Emirates), Qatar, Bahrain, and Kuwait. It also includes three sensitive passages omitted from the public issue: a paragraph on the Sheikh of Sharjah’s claim to the islands of Abu Musa and Tanb (p. 45), a passage on Persian and Turkish claims to sovereignty over Bahrain (p. 48), and a principal part of the following paragraph, concerning an agreement between Great Britain and Sheikh Mubarak Al-Sabah, the ruler of Kuwait:

"On several … occasions … British naval and diplomatic support was considered necessary to protect the Sheikh against Turkish designs. In 1902 the Turks established military posts at Umm Kasr and Safwan, and also upon Bubian Island, territories which the Sheikh claimed as lying within his jurisdiction. The Government of India took a serious view of these aggressions; and the importance of asserting the Sheikh’s claim to Bubian was emphasised by an Inter-Departmental Committee in 1907. In that year a Secret Agreement was signed with the Sheikh, granting to His Majesty’s Government, for a yearly rental of £4,000, a perpetual lease of a portion of the foreshore of Bandar Shweikh (near Koweit), which is held on topographical and hydraulic considerations to possess greater capabilities as a railway terminus than any other place on the Persian Gulf. The agreement includes rights of pre-emption in regard to Ras Kathama, Warba, and any territory over which the Sheikh may exercise jurisdiction. British influence at Koweit had been previously strengthened by the visit of the Viceroy of India in 1903, and the establishment in 1914 of a British Political Agency" (pp. 53f.).

Extremities a little faded and dusty, minor bumps to corners. Closed tear to top left corner of map professionally repaired. A very good copy of a rare and innately fragile publication. LibraryHub and OCLC locate just two copies, at the British Library and University of Exeter.

Macro 186 (inaccurately noting a Handbook of the Persian Gulf, Foreign Office, London, 1918). Wilson, p. 73 (noting the version in the Peace Handbook series, 1920, but giving the date of publication incorrectly as 1918). 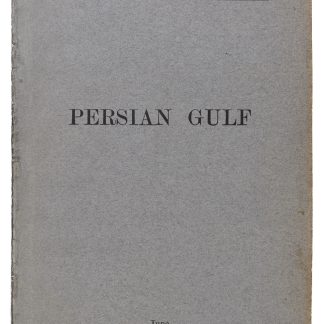 You're viewing: [Foreign Office]. Persian Gulf. Handbooks prepared under the direction of the historical …London, June 1919. € 25,000.00
Add to cart