Werfel, Franz. Paul Among the Jews.

First edition. Preceding his illustrations for "The Glass Tower" (1944-45), Lucian Freud's jacket design for Werfel's play marks the first appearance of his work as book illustration. The entire design is his, including the elaborate lettering, whose intials seem unsettlingly to sprout roots and whiskers, and the squat bearded figure with two oversized feet. The founder of the Grey Walls Press, the poet-publisher Charles Wrey Gardiner, later regretted his decision to commission the work; he disliked the "odd squat figure", but especially objected to the figure having a pair of right feet "because the girl he was using for the drawing was too cold to take the stocking off her left one".

Interestingly, a surviving preliminary sketch shows a much more conventional figure in a seated position, with knees drawn up and hands clasped in front. The finished illustration, calling to mind the medieval Blemmyes and monopods but also oddly reminiscent of the artist's late grandfather Sigmund Freud, is distinctly more engaging. 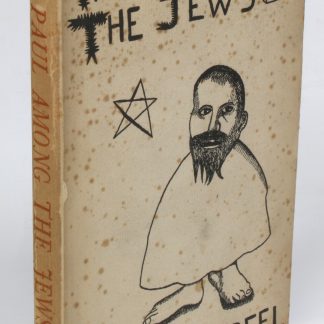