To Anita Drysdale Hawkins (1874-1957), an employee at his Wardenclyffe Tower plant in Shoreham, New York. Generous to the last, Tesla sends funds for his workers' salaries and to pay for their Thanksgiving turkeys. At this point, Tesla was deeply in debt and had turned to working on mechanical engineering projects so as to try and keep Wardenclyffe operational, in an effort to finally complete it. He still sought to reach his vision of transmitting wireless power around the globe.

Tesla also mentions: "Your letter has alarmed me and I would wish you to look for some reliable man to watch the place. If you find one communicate with me at once so that I may arrange for employing him." Apparently this was the result of hearing Miss Hawkins's report of vandalism that had occurred at the sparsely staffed plant. He signs off with, "P.S. Oblige by writing". 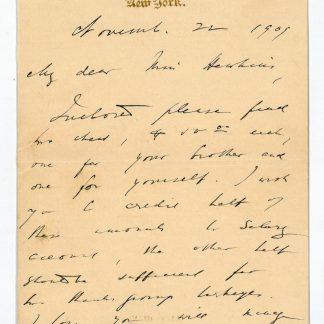