A miniature Sanskrit devotional consisting of the complete text of the Bhagavadgita, the famous Hindu devotional poem. The text is written in black glossy ink with rubricated punctuation marks; significant words, such as chapter titles, are also written in red. The text is elegantly laid out with five lines per page enclosed within a black, orange and red rectangular border, surrounded by ample margins. The 18 fine miniatures in Pahari style, with opaque water-based pigments and gold, depict devotional scenes with a special emphasis on Krishna and show Lord Vishnu in his ten principal manifestations (Avatars).

The Bhagavad-Gita, considered one of the holy scriptures for Hinduism, is a 700-verse Hindu scripture that forms part of the epic Mahabharata. Dated to the second half of the first millennium BCE, it is a work typical of the Hindu synthesis.

A few very minor edge flaws near the end; the final page is annotated in English in a 19th century hand: "The mysterious Bhagavat-gita; a dialogue between Crishna and Arjuna, on the Knowledge of God, & the means of attaining reunion to the divine soul: in eighteen lectures extracted from the Mahábhárata, an epic poem". Provenance: private UK collection. 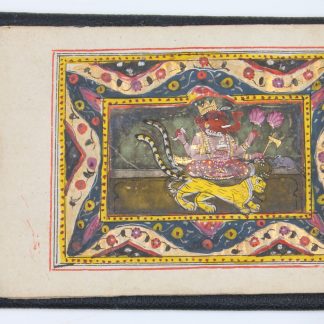