Protecting the British oil fields in Persia: Britain shifting its alliance from Sheikh Khaal to Reza Khan and the central government in Tehran

6 telegram folios (208 x 304 mm), dated 6 to 18 January 1922, pinned together with a cover note marked "very confidential" with the oval embossed seal of the Government of India. Includes a Grant of the Dignity of a Companion of "the Most Eminent Order of the Indian Empire" to Eardley Garforth Bryan Peel, issued by King George V, dated 2 June 1923, signed by the King and by Viscount William Peel as Secretary of State for India, to acknowledge the services rendered to secure British interests in the southern provinces of Persia. Stored loosely in later dark green calf document holder box, spine stamped in gold "Residency Ahwaz Bushire 1922/3" (257 x 375 mm).

A collection of confidential Anglo-Persian diplomatic cables relating to the appointment of Eardley Garforth Bryan Peel (1888-1976) as British Consul General at Ahwaz (Southern Iran) in view of his good relations with the Bakhtiari Khans, Sheikh Khazal of Mohammerah and the Anglo-Persian Oil Company (APOC).

This group of important telegram exchanges from Percy Lyham Loraine (Envoy Extraordinary and Minister Plenipotentiary at Tehran), Arthur Prescott Trevor (Consul General at Bushehr, Southern Iran), and the Indian Political Service at Delhi, are pinned together with a cover note dated 18 January 1921, marked "very confidential" and bearing the stamp of the Government of India, indicating their subtle and yet relevant relation. They testify to the British government's shift of alliance from Sheikh Khazal of Mohammerah to Reza Khan and the central government in Tehran. The Grant of Dignity appointed to Peel further emphasises the connection between this prominent stakeholder and British oil interests. Thus, this collection plays a crucial role in shedding light and understanding the 'behind the scenes' of British foreign politics related to the protection of their oil fields in Khuzestan, and their procurement and management of Iranian oil in the first two decades of the 20th century.

Ever since the British discovery of oil in the Southern Iranian Province of Khuzestan in 1908, and the formation of the APOC the following year, a fine balance was maintained by knowledgeable British Consuls General between the Bakhtiari leaders, seated in Bushehr, and the powerful Sheikh Khazal (who inherited the Emirate of Mohammarah in 1897), seated at Mohammarah. The Khans and the Sheikh, ruler of Arabistan, received annual payments, political support, as well as arms and munitions from the British in return for guaranteeing support and protection of British interests against external attacks and providing security for the oil establishment. Until Reza Shah’s rise to near-absolute power and his coup d’état of 1921, the Iranian government had little control of the de facto autonomous province of Khuzistan and their local leader. This explains why all of Loraine’s formal and informal efforts, as British Envoy Extraordinary and Minister Plenipotentiary in Iran from 1921 until 1926, were directed towards achieving the peaceful submission of Britain’s Southern Iranian allies to the regime in Tehran.

In such delicate circumstances and given the inevitability of a conflict between the burgeoning central government in Tehran and the Southern Iranian tribal powers, the re-appointment of Eardley Garforth Bryan Peel, whose term of office at Ahwaz had ended in 1921 at the same time Loraine assumed office at Tehran, became a necessity to be able to mediate between the two litigious parties. In fact, Peel was the only person who not only had an in-depth understanding of the situation but was trusted by all members involved. As shown in our telegrams, the Indian Political Service at Delhi not only accepted Loraine’s advice to allow Peel to remain Consul General at Ahwaz but also nominated him to receive a British CIE order. Peel proved a skilled negotiator and succeeded in his mission of yielding a peaceful transition of power in Southern Persia and avoiding any threats to British interests in the oilfields. He managed to convince Khazal and the Bakhtiari Khans to meet in Dare Khazinah from 22 April to 2 May 1922 and made them promise to cooperate in virtue of protecting British interests, but also to continue to serve the Persian government faithfully and loyally, in order not to irritate Reza Khan.

Despite Peel’s tactful diplomacy, which averted great bloodshed, the British soon abandoned their Southern Iranian allies in favour of good relations with the increasingly powerful central government. Khazal was persuaded to surrender unconditionally and Reza Khan had him abducted and brought to Tehran, where he was kept for several years. His sheikhdom was abolished, and the provincial authority took full control of regional affairs. The Sheikh was stripped of all his powers and Iranian assets, and when he denied relocation to Iraq or Kuwait, he was assassinated in Mohammarah (now Khorramshahr) in 1936. These documents play a crucial role in unravelling the extremely complicated and confidential sequence of events that took place in those years, which stained early 20th-century Anglo-Persian diplomatic relations with the uncontrollable force of nature oil was to be in modern history, and specifically, in the geopolitical chessboard of Middle Eastern foreign affairs.

E. G. B. Peel was a British diplomat who, after achieving the rank of Captain in the Indian army, was posted first as Assistant-Superintendent of Police in Moradabad (Agra province, India) and later as a member of the Indian Political Service to the consulate at Mohammerah, where he rose to the rank of Acting Vice-Consul. In 1918 he was transferred to the consulate in Ahwaz, where he served until 1924 in the posts of Acting Vice-Consul (1918-21), Local rank Consul (1921-22), and Consul (1922-24). After completing his service at Ahwaz, he was posted to Agra and Kashmir provinces in India. He received the illustrious CIE (Companion Order of the Indian Empire) in 1923. 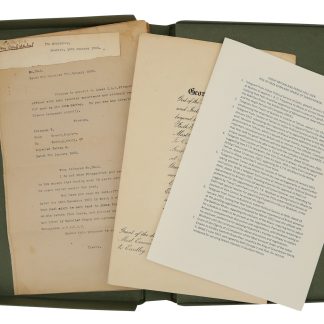