In one room in Havana, sharing cigars: Che Guevara, Simone de Beauvoir, Jean-Paul Sartre, and Antonio Núñez Jiménez. Guevara had a lifelong interest in French existentialism, and after the success of the Cuban Revolution found himself able to invite Sartre and de Beauvoir to visit Havana in his new role as guerilla fighter turned diplomat. Jiménez, a local, was not a philosopher but a scientist and geologist - another occupation Guevara admired - and the first president of the Cuban Academy of Sciences. The original photo was taken by Alberto Korda, who has signed and dated the print in black felt-tip pen on the lower right. 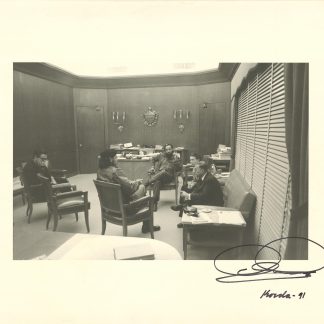